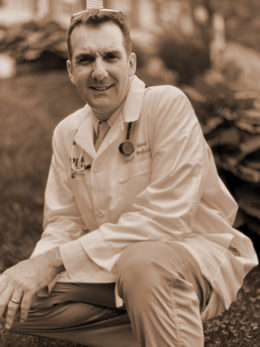 Dr. Mark Huber has been seeing emergencies at PETS for over a decade. Born and raised in Lancaster, he was thrilled to move back home after spending the first decade of his veterinary career seeing not only dogs and cats but also horses, cows, sheep, and goats in the Finger Lakes of upstate New York. There, no central emergency hospital such as PETS existed. Instead, Dr. Huber saw all of his own emergencies at the practice. This served as the natural progression into full time emergency medicine at PETS beginning in 2008. For the last five years, he has also proudly served as the medical director of the ER.

Outside the office, Mark and his wife Stacey are literally raising the Brady Bunch: three girls and three boys (sadly minus Alice the housekeeper). The children, alongside their pets (three dogs and three cats), make life quite full and always interesting. For fun and escape, you’ll find Mark riding the back roads of Lancaster, these days usually with Stacey on their tandem bicycle.